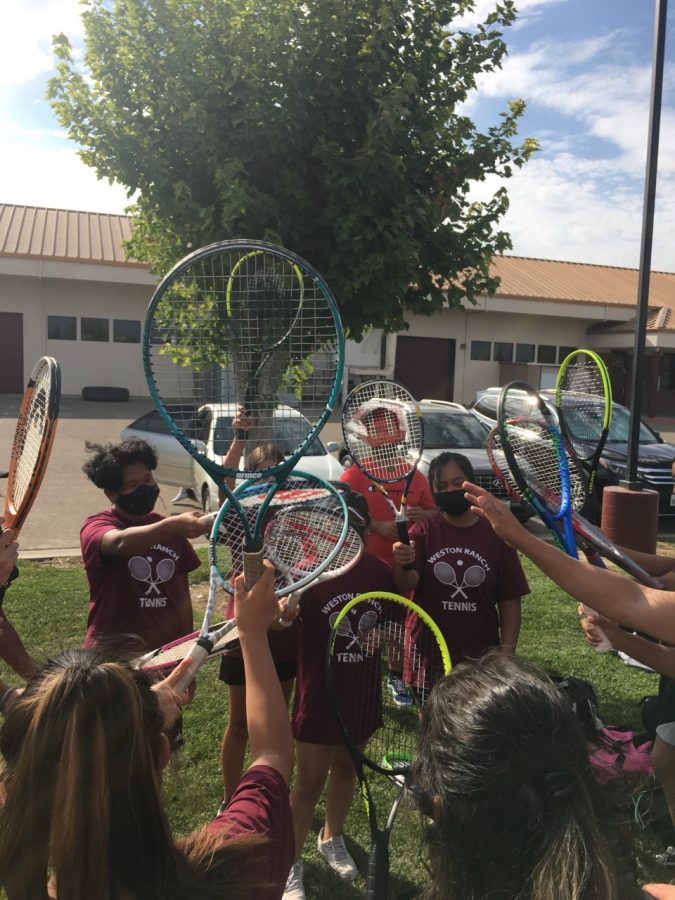 Yesterday, Weston Ranch’s girls tennis team defeated East Union 6 games to 3. The victory was the second win of the year for the Cougars, and for the first time in Michael Cerezo’s tenure as head coach, the Cougars have a winning streak.

Cerezo took over the program in 2019. In his first season, the Cougars were 3-6. Then, COVID came along and shut down the program, causing the cancellation of the 2020 season. So, without an entire season to get his team practice and court time, the Cougars took the court this year full of hope but not much experience. However, the tennis program has never wavered in their desire to compete and have fun, both testaments to their coach and his philosophy to show up, learn, and battle.

“There have been several matches with the girls down 3-4 game points, and they have been able to come back to win their matches,” Cerezo said. “The team is ladened with freshman and sophomore players, and they are constantly learning and improving their tennis skills and techniques.”

The Cougars beat Kimball HS on Tuesday (7-2) and followed up with the win over East Union yesterday (6-3), improving their overall record to 2-6 in the rough and tumble VOL. During the victory over Kimball, the Cougars got strong play from their #1-4 singles players (Harvir Hothi, Ella Nykanen, Jolette Jaramillo, and Rain Cabutotan), giving the Cougars a 4-2 game lead heading into the doubles matches. The doubles teams of Nathalie Lopez and Lluvia Arevalo, Fatima Pardo and Ida Farsund, and Aaliyah Hassan and Heidi Araiza won all three of their matches and closed out the victory.

Wednesday’s win over East Union was the opposite. Singles players Hothi, Nykanen, and Jaramillo took losses, but #4 Rain Cabutotan got a 3-set win, #5 Nguyet Ngo and #6 Giselle Rivera won in straight sets, setting up the critical final doubles matches showdown. Lopez/Arevalo and Manvir Kaur/Farsund won in consecutive sets, and the team of Hassan/Araiza dropped their first match but rallied to win the next two handing the Cougars their second win in two days.

“I’m proud of the girls’ fortitude when playing from behind during the two-game winning streak,” Cerezo said. “The future looks bright for Cougar tennis.”

The Cougars are one win away from tieing their most successes and two away from a new win record under Cerezo’s guidance. And with four games to go, the Cougars may or may not make their win goals, but it certainly has been an exciting two days for the program.