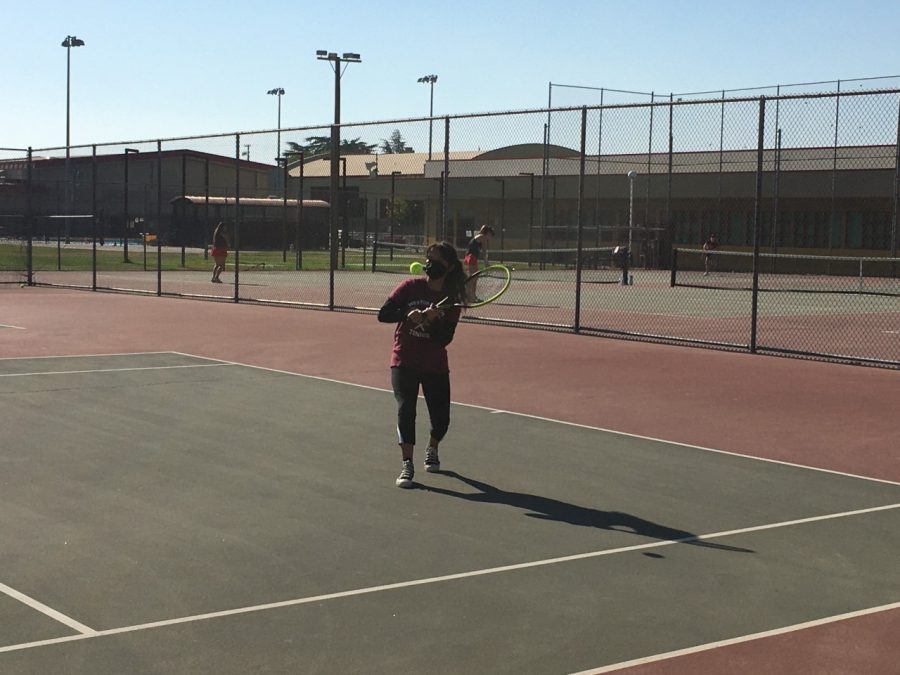 Jolette Jaramillo fires back a winner-photo courtesy of Mr. Cerezo

The WRHS Lady Cougars tennis team had their second league match against Oakdale on September 14. The Mustangs beat the WR team by a score of 7-2.

Senior Ella Nykanen beat her number four opponent in two sets, 7-5 and 6-4, advancing her match record to 2-0 in league play. Sophomore Jolette Jaramillo won her match in a challenging third set 11-9. Jaramillo was on the brink of losing as her number five opponent had match point 9-6, but Jolette won 5 points in a row to score the comeback victory.

As the team continues to play, they are making good progress as tennis players. For most of the tennis players, this is their first time playing competitive tennis. Coach Michael Cerezo knows it is not all about winning but mainly about learning and having fun.

“The rest of the team are constantly improving as they are competing for the first time or at most a second time,” Cerezo said.

The current Cougars tennis team is very devoted. Practice makes perfect. As tennis players continue to practice, the team practices the different strokes of hitting. In the beginning, the players struggled with learning the correct stroke and serves. They had to learn a scoring system that was unfamiliar to them.

“They’re a very young team that is still developing their tennis skills and prowess,” Cerezo said. “Therefore, it’s been challenging for the players during practice, but they are giving their best effort. Development and execution of tennis strokes are paramount in the game, and the players understand they need to practice them.”

After Tuesday’s match with Oakdale, the Cougars faced the very experienced Central Catholic High School team. Unfortunately, the Cougars lost 0-9 to the Raiders.

Cerezo added, “This year’s Cougars tennis team is full of first-time and second season returning players. They have a “never quit” attitude and have performed well since we started.”