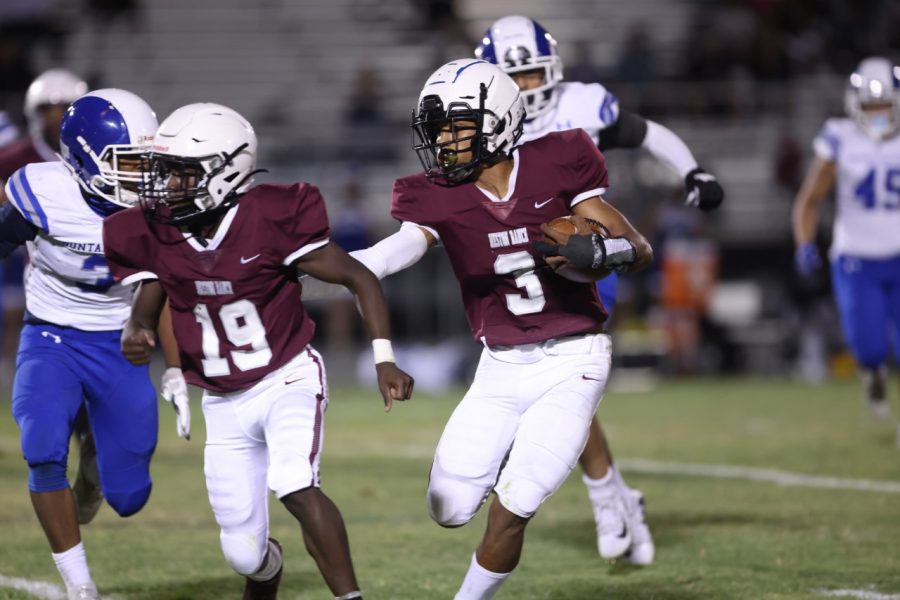 A back and forth, sluggish first half between Weston Ranch and visiting Mountain House turned into a fast-paced, chaotic, and classic second half last night at Cougar Stadium. Both teams spent the first 24 minutes sizing each other up and looking for weaknesses early, like prizefighters. However, it turned out to be an all-out brawl in the waning minutes of the second half, and the Weston Ranch Cougars ended the evening with their arms raised and 26-24 victors.

“The win last night was pretty exciting, and it felt good,” a happy but emotionally spent head coach Ron Waymon told The Prowl. “Many of the players said it was good to wake up with the “W” and especially one at home, and I agree with them.”

Let’s just cut to the chase. Weston Ranch scored on four of their final six possessions. Mountain House scored two times in the last 93 seconds, setting up a dramatic final play where the Mustangs of Mountain House needed two points to tie, and the Weston Ranch Cougars needed a brilliant play to stop them. With no time on the clock, the Mustangs threw a pass to the back of the end zone, and the Cougars thwarted the effort. Game over.

“The ending of the game was crazy, but the way the offense kept fighting and then the defense kept stepping up several times for the stops was super impressive,” Wayman said.

It was a dramatic and fantastic finish. And considering this was WR’s first football home victory in nearly two years and the fourth win overall in four years, the Cougars had every reason and right to celebrate. Earlier in the day, the students attended a rally. At the game, the band was there, the cheerleaders were there, the choir was there, and the fans returned en masse to support. The football win was the perfect ending to a fantastic day here on the Weston Ranch campus.

Wayman went on to say, “It was a fantastic night for Cougar Football. The players played their hearts out and left everything on the field. We could not have had last night if we did not have the fans that came out on a Thursday, our Color Guard, the support of the teachers, and our AMAZING Band and Choir. So many great things happened last night.”

Quarterback Namir Brown-Sanger had a game for the ages. He put the Cougars on his back and willed them to win. Brown Sanger scored three rushing touchdowns (2, 25, and 84 yards) and threw for another (a beautiful 12 yard fade to Andre Hughes) to get the Cougars rolling. However, his 84-yard sprint to the end zone was remarkable. Facing a critical 3rd down and long, Brown Sanger sprinted to his right, appeared to be stopped, and then busted through the Mustangs on his way to the end zone. It was a massive play from an emerging star.

“The week of practice leading up to the game, the word and focus was intensity,” Wayman said. “That intensity started with Namir Brown-Sanger. Impressive doesn’t come close to the play last night. His exciting 84 yard run for a touchdown was for the records. Breaking tackles and getting a key block from Elijah Rivers showed how much this team was willing to do to win.”

According to the Manteca Bulletin, Brown Sanger’s totals on the evening (12 carries, 148 yards, three touchdowns; 4 of 8 passing, 70 yards, one touchdown, and one interception) indeed are worthy of record checking. But it was the 84-yard run that people will talk about today.

“It was a very exciting game,” Brown-Sanger said. “I just kept moving my feet on that long run, and once I got past everyone, I had a flashback to freshman year when I got snatched down, so I had to run as fast as I could” (Manteca Bulletin).

Finally, the Cougar defense did their part and was not to be overshadowed by Brown Sanger’s brilliance. Three times the Cougars stopped the Mustangs on fourth downs to get the ball back to Brown Sanger and the Cougars offense. The Cougar defense had the enormous task of corralling sophomore QB Amare Brooks. While Brooks had his own unforgettable evening (17 of 22 passing, 347 yards, two touchdowns, according to Manteca Bulletin), Brooks and the Mustangs couldn’t convert the 4th downs because the Cougar defense stepped up and made stops when they needed them the most. Those early stops were crucial at the end as the Mustangs posted quick scores in the final 93 seconds to have a shot to tie at the end.

Next up for Weston Ranch is Lathrop High. The two schools will renew their “Battle of I-5” rivalry next Friday at Lathrop. But for now, the team will enjoy the rewards so rightly earned and deserved.

“Last night, in our locker room, I told our players to enjoy the win for the night. Tomorrow we begin our focus on Lathrop next Friday and bringing back the Battle for I-5 trophy to Weston Ranch.”