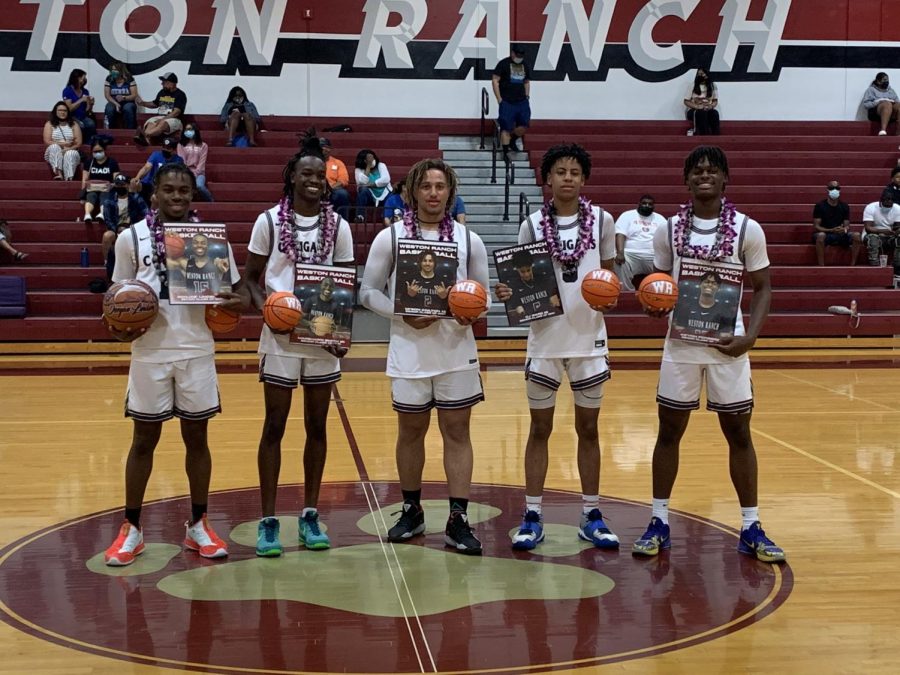 The Weston Ranch boys basketball team won big last night. The victory, a 93-36 dismantling of an outmanned Sierra High School team, was the first of the year for the Cougars in this pandemic shortened season, and it couldn’t have happened on a better night for Weston Ranch High School.

It’s been a bit of a crazy ride for this year’s club. They didn’t get to defend their CIF NorCal Division II championship, they lost their head coach in November, they had their season shortened to ten games, and they didn’t get to enjoy many of the perks of being a member of Cougar basketball. However, last night was Senior Night for five of the Cougars, and they took out their cumulative frustrations on Sierra.

“It was nice to see the seniors celebrated the way they should be after their decorated careers with the school,” said interim head coach Edward Menzel. “I’m glad they got to have fun and enjoy themselves on their special night.

Playing with only seven, the Cougars quickly showed the fans in attendance what could have been. Regular staples of Cougar basketball (dunks, 3s, insane pressure defense, and lots of running) quickly had the Cougars out front. Senior Craig Ward began the scoring with an easy layup, and Senior Marshawn Smith wowed the crowd with a thundering dunk, and the Cougars raced out to a 20-9 first-quarter lead.

As the evening progressed, the Cougars extended their lead on Sierra and never looked back. The Cougars used a 20-0 run to open the second half and built a 65-20 lead with 2:47 to play in the third quarter. As the fourth quarter began, the running clock rule was initiated, and the Cougars kept up the onslaught, eventually looking up and seeing the 93-36 on the scoreboard.

Fourth-year guard Donjae Lindsey took full advantage of Senior Night and showed the crowd how special he is. Lindsey torched the Timberwolves for 43 points. He hit six three-pointers, including five in the third quarter, and every time he had the ball, the crowd waited to see what he would do next. It was quite an evening for Lindsey and one the fans will certainly never forget.

“It was so fun,” Lindsey said. “It was a great night for me, my fellow seniors, and our team. I just was in a zone, and it was great to share this night with everyone.”

Besides Lindsey’s 43, the Cougars (1-0, 1-1) received scoring help from Ward (17), Smith (15), Senior Mi’Son Coilton (10), and Senior Ke’Yon Forbes (6). Coilton didn’t have to score much (he did have two spectacular three-pointers from long range), so he spent the night assisting Lindsey, Ward, Smith, Forbes.

On a night designated to honor the Seniors, Weston Ranch’s Lindsey, Coilton, Ward, Smith, and Forbes celebrated in style.

The Cougars travel to Sierra tonight for game two of their series. Tipoff is scheduled for 7 pm.