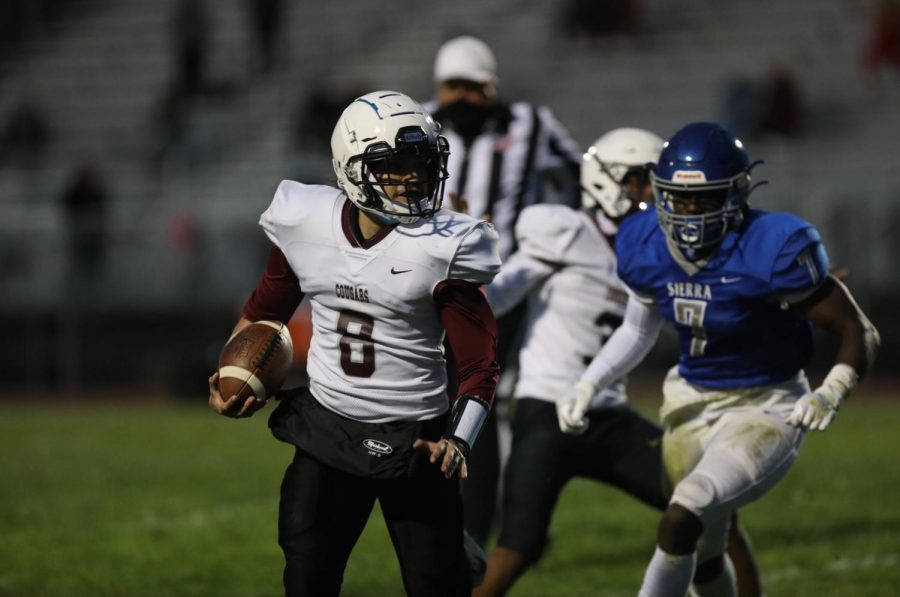 Last Friday, after 14 long months of waiting, Weston Ranch was back on the football field. As odd as it was to see Friday Night Lights in March, the Cougars hit the gridiron, ready to put all of the waiting and indecision behind them. The night was a bit surreal. However, it was high school football, and after the Cougars took the opening kickoff, it became a regular football Friday.

The Cougars took on Sierra High School last Friday, and the initial excitement was high. Aside from the fact that there were limited spectators, both schools were anxious and ready to play football finally. After all of the waiting, the 7 o’clock kick took off, and the Cougars received the ball and got ready to see who they were and what they had. Their first offensive series consisted of three plays, with the final play being a fumble which caused a turnover. It wasn’t the start Head Coach Ron Wayman wanted, and indeed not the beginning the team wanted. Any time you give the ball back to your opponent is not the best, but giving the ball back to Sierra so early in the game was not in the game plan. Sierra had tremendous size, strength, speed, and experience, so the early turnover was something the younger and inexperienced Cougars did not want to do early in the first quarter. As a result, Sierra took over and scored a quick touchdown, and the Cougars were down 7-0 in a blink of an eye. Another score by the T Wolves had the Cougars down 14-0, and it looked like Weston Ranch would be in for a long night.

However, this wasn’t the same Cougars we’ve seen the past few seasons. They had a spirit and a fight sorely lacking during previous coaching regimes. They took their third possession and marched 45 yards for a touchdown (a 6 yard TD pass), and the Cougars were down 14-7. It was a methodical drive consisting of 11 plays, and it showed that this team might be able to compete.

As the evening moved along, the Cougars fell victim to the T Wolves’ big plays and couldn’t match up with Sierra’s size, speed, and experience. As the final buzzer sounded, the T Wolves defeated the Cougars 55-7. The score was what it was. But, the change in the air was quite noticeable even though the score seemed a bit lopsided. The Cougars played hard the entire game. They battled a formidable opponent. And, although they walked off the field with a loss, they walked off the field knowing they did their best, and they should all be proud of that accomplishment.

Tonight, Weston Ranch travels to Denair High School for their second game in this abbreviated season. The Coyotes of Denair lost last week so that both teams will be looking for their first Win. It’s an excellent opportunity for the Cougars to see how much they’ve improved from week one and a perfect chance for the Cougars to keep building on their new beginning.

“Last week’s game was a welcoming to the VOL and Varsity football, for our players and especially for me as a new Head Coach,” Wayman told The Prowl. “The expectation for this week’s game is to put together a whole game effort. Last week, there were glimmers of good things, but today we need to take those glimmers and make them a reality for the entire game.”

Denair offers another challenge to the Cougars. The Coyotes were the 2018 Division VII CIF Sac-Joaquin Section Champions, and they are a consistent powerhouse in the Southern League. Tonight’s game will not be easy for the Cougars, and Wayman is realistic in his assessment.

“Denair is a smaller school. Once again, we are facing another former State or Section Champion. So they will be coming to play,” Wayman said.

The Cougars will continue to make progress and keep pushing forward with their mission. Tonight, the Cougars will focus on what the program needs to accomplish. But, the overall goal is still the same.

“The first and most important goal is to get the win. We will have to play our game, play a complete game, and eliminate big plays and mistakes to win. In this week’s practice, there were some significant improvement steps; now, tonight, I want to see those steps in the real-time of a game.”

Kick-off for tonight’s contest is scheduled for 6 pm.