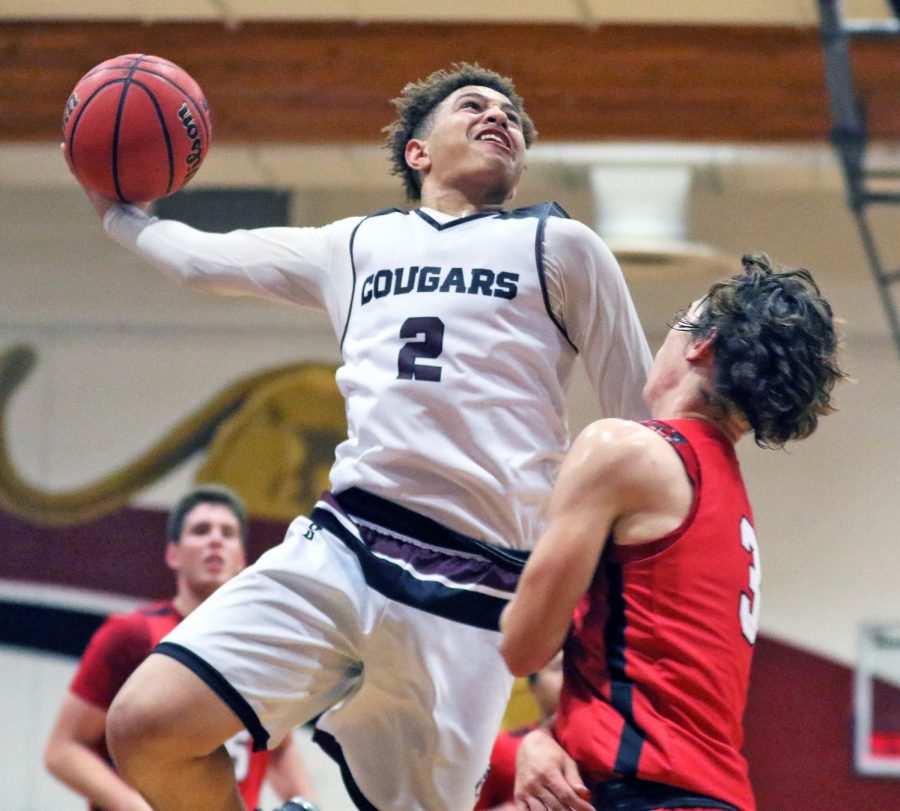 Our boys Varsity basketball team notched their first victory of the season last night, besting the Indians of Ripon High School, 65-40.  After spotting Ripon an early 6-0 lead in the first quarter, Cougars coach Chris Teevan called timeout 30 seconds into the first quarter to calm the nerves and refocus his group.

“We didn’t have the energy we needed early in the 1st quarter.  Once we figured out how to execute our game plan, we had really good energy, and our offense followed our strong defensive play.  The defense is tied to the offense, and our shot selection got much better after we played better defense.”

It was apparent the Cougars were a bit rusty after a week-long layoff, but the strong guard play of Titus Haley and Mi’Son Coilton got the Cougars rolling in the 2nd quarter and they never looked back.  The game was tight throughout the 1st half as the Cougars would build a small lead only to have Ripon chip away at the deficit and not allowing the Cougars to pull away.

“Titus was a constant the whole game, and once we got Lydell (King) and Devin (Small) going, our execution became a little better,” Teevan added.  “We know what shots we want to take, and when we run our offense, rebound, and make shots, it’s easier to set our defense.”

And set their defense they did.  Playing relentless pressure defense, led by Coilton’s five steals, the Cougars erased Ripon’s early lead and led 24-16 at the half.  Ripon was unable to get their 6’8″ center Vincent Olmo involved in their offense for most of the evening.  Although the center had 17 points, he was never really a factor thanks to strong defensive play from Haley, Coilton, Da’Quan Kelley, and Raul Melgarejo.  While Haley and Coilton controlled the frontcourt with pressure, Kelley and Melgarejo smothered the Ripon big man and cleared the defensive boards with rebounds.

The critical point of the game came midway through the 3rd quarter.  Clinging to a 7-point lead, Coilton drilled a 3-point basket, which clearly energized the team and the raucous crowd.  As the Indians attempted to inbound the ball, they were called for a 5-second violation and turned the ball back over to the Cougars.  Haley took the incoming pass and drained a 3-pointer from the corner, putting the Cougars up 34-21.  Although Ripon did close the gap to 10 points, the Cougars continued to apply defensive pressure and finally began to pull away en route to their 15-point victory.

“It felt good to get back on the floor,” an excited Coilson said.  “We played good, and it was a great win.”

Haley added, “At halftime, coach told us to push the tempo and make them run.  They got tired, and we found our shooting rhythm.  He wanted us to take care of the ball and play smart.”

Donjae Lindsey led all Cougar scorers with 13 points, Coilson chipped in with 12, Haley added 11, and Devin Small rounded out the scoring with 10.

The Cougars will be on the floor Thursday the 29th as they travel to Arch Bishop Mitty High School in San Jose, and finish the week at Modesto Christian High School this Saturday, December the 1st, as they take on Capital Christian.  The Cougars will be on the road all of December as they play in various Holiday tournaments and return home on January 10 to face Central Catholic.

In the JV game, our Cougars were victorious as well, defeating Ripon 57-48.